New Orleans is one of the tourists’ most visited cities in the US. What is popular and most especially unique about this city is the multicultural events and the music appropriateness. More to this, New Orleans is widely believed to be the birthplace of Jazz, having Louis Armstrong as a native of the city.

Also popular in this city is the high crime rate. Statistically, New Orleans establishes seniority when it comes to crime levels of the cities in the US. But this relatively small city, however, is as safe as other cities in the US, granted the areas to avoid are pursued with caution.

So, what are the bad areas of New Orleans?

This is a mixed neighborhood comprising of commercial and (mostly) residential sections. The population is 3,437 with a lot of low-income earners gravitating towards.

According to Spotcrime, crime incidences show that theft, assault, and burglary are key issues in the neighborhood. Property crime, especially, carries a huge risk. In 2019 statistics released by the FBI, out of a total crime of 14,448 in Tulane - Gravier, property crime occupies a whopping 11,485. The rest being 2,963 covers for violent crime.

But being a relatively small neighborhood when compared to other cities, these crime rates are considered very high. Apparently, the result of violent crime confirms as being 679% greater than the national average. As a result, Tulane-Gravier closes out as safer than 0% of cities in Louisiana. To become a crime victim is a matter of 1 in 7 chance. 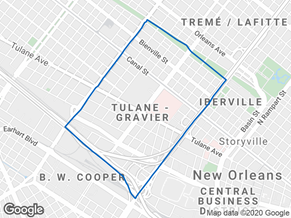 This turns out to be the oldest African-American neighborhood in the US. Currently a dwelling place for 4,490 people, who pride themselves in a rich history filled with music. While the culture in Treme Lafitte's museums, churches, or squares may be interesting for tourists, the crime wouldn’t.

With very similar crime reports as Tulane neighborhood, property crimes also tend to rule in this side of the city. Occasional drive-by shootings, muggings, home invasion robberies, and murders splash across the neighborhood now and again.

The FBI crime report gives an estimate of 14,643 total crimes per 100,000 residents. This places Treme' Lafitte’s violent crimes as 664% greater than the national average. Like Tulane also, this neighborhood wraps up as safer than 0% of cities in Louisiana. Glad enough, police presence in this neighborhood is quite high.

Residents warn tourists to avoid the far north of Esplanade. Closer to N. Rampart/St. General exploration should be by cabs and Ubers, not foot as nighttime can be scary. 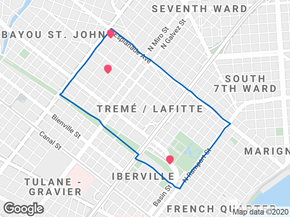 Formerly a racially mixed residential neighborhood with a population of 13,536, of which more than 40 percent live in poverty; so invariably, crime rate shoots up.

What should be noted is, this neighborhood gets tangled in gun violence. A couple of years ago, every 1 in 5 shootings reported in New Orlean is undertaken in Central City. Though this neighborhood makes up less than 7 percent of the city’s population, almost 20 percent of the shootings experienced can be accounted for by the gangs in New Orleans.

2016 Statistics from the Data Centre/ NOPD established that, for average shooting, a person in Central city gets shot 42 times per year. This average rose to 51 the following year. And it only kept rising years after.

For the current total crime reports, there are 11,461 per 100,000 residents. But the city’s violent crimes in Central City are 571% greater than the national average.

The part of the neighborhood to run the opposite direction are around Danneel, Second, MLK, and S. Robertson. Walking privately or at nighttime, especially for females or tourists, is sternly kicked against. 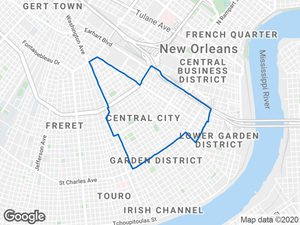 One of the neighborhoods in New Orleans with a population of 3,187. The crime levels in this neighborhood, though not dangerous, is not entirely safe either. Records still maintain data on the high crime rate for property crimes. Total crime being 9,846 per 100,000 residents.

In Pines Village, there is a 1 in 11 chance of being a crime victim.

One of the safest hotels around Pines village happens to be Super 8 by Wyndham. And the commute is as safe as a handshake. No record of pickpockets or cash robberies. 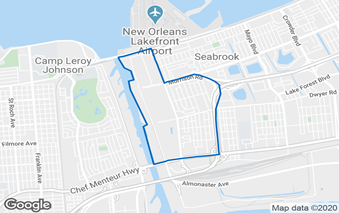 This neighborhood has a population of 4,260.

From Spotcrime, current data on criminal incidences in this neighborhood discloses burglary as the highest felt crime. Theft and assault come closely second and third. Also, in the past six months, shootings have shot up to 100. 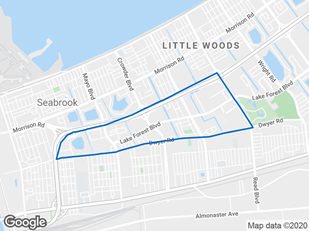 Back in 2016, this neighborhood was crowned the fourth-highest rate of gun violence incidences. Having a population of 6,398, gun crime seems to be the highlight of St. Roch. The shootings recorded for Central City were similarly experienced in this neighborhood, but only half as much.

For general safety, cabs and Ubers should be substituted for getting around on foot or bikes. And late-night strolls should be avoided. According to a few old-time residents, this neighborhood is relatively unsafe for a single female. 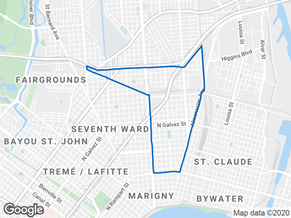 Sometimes referred to by residents as the second most dangerous neighborhood, Seventh Ward has a population slightly above 10,000. The most commonly reported crime in this neighborhood is assault, closely trailed by theft. In May 2020 alone, Spotcrime revealed 71 total cases of both. The petty crime took the largest number (263) and the rest such as vandalism, robbery were very minimal.

The total crime registered was 10,643 per 100,000 residents. This puts violent crimes in Seventh Ward as 543% greater than the national average.

When faced with the question, is New Orleans dangerous for tourists, it is relative. Residents or tourists in Seventh Ward have a 1 in 10 chance of being a crime victim in this neighborhood.

Though Seventh Ward may not be utterly dangerous, being a big neighborhood, there are quite a few unsafe areas. Besides, police presence is not hugely felt as residents confess. Near St. Aug should be visited with caution. Also, between Claiborne, Broad, Esplanade, and St. Bernard. 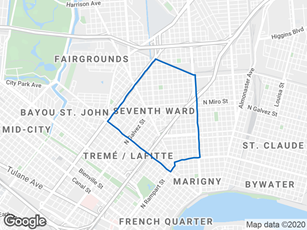 This is one of the largest neighborhoods in the city having a population of 14,238. Though known for their eclectic restaurants, and above-ground cemeteries, Mid-city also sweats over the upsurge in crime and homicide rate. This mixed with the high poverty rate.

Residents commonly believe the police are understaffed, and only concentrated in heavy tourist areas. But the area between India House and the Streetcar stop does not seem to incite unsafe ratings.

Most people advise keeping away from traveling on foot especially past daylight for tourists and females. In Mid-City, the chance of being a crime victim is 1 in 16. And this neighborhood is safer than 26% of Louisiana’s cities. 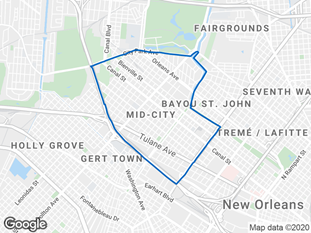 This neighborhood has a population of 6,562. The crimes that are peculiar to St. Claude are assault, theft, and shootings. According to recent reports, in the past six months there have been 35 shooting incidences documented, and 75 for assault. Year in and out, crime has only but increased by 15 percent.

Altogether, the total crime is 10,756 per 100,000 residents. This averages violent crimes in St. Claude as 507% greater than the national average. 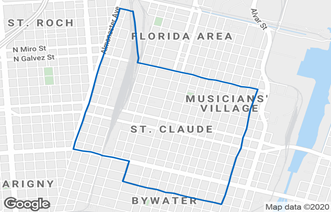 Down the river from the French Quarter, Marigny is known for the great live music district - which makes Frenchmen Street a must-visit for music enthusiasts. The population of this neighborhood is shortly approximately 3,000.

For safety talks, Royal and Spain while relatively safe, there’s the need to be careful around Rampart and Spain. Property crime seems to be leading in this side of the neighborhood. And to be a crime victim is a 1 in 12 chance. 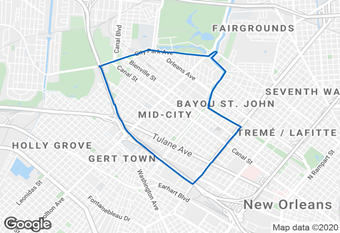 Now, what is the most dangerous neighborhood in New Orleans?

Occupied by 2,144 people, the total crime estimate in this neighborhood is 3,052 per 100,000 residents. The violent crimes in Pontchartrain Park are not major concerns as they sum up to be 28% greater than the national average. 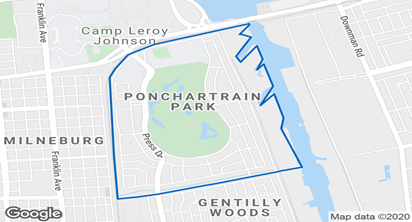 This neighborhood has danger signals on the low and they appear to be safer than 38% of Louisiana’s cities. The population is 8,886, from the spotcrime data; this neigbourhood’s residents have minimal crime rate. There have been only 11 burglary incidences reported in the last 6 months, from May 2020. You don’t necessary need be nervous when travelling on foot or bike at any time of the day. 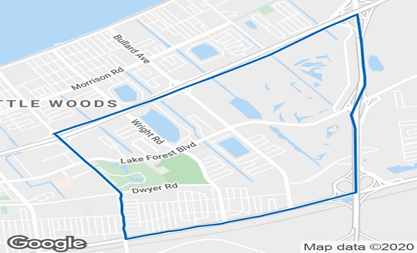 Theft, burglary, and assault are flatly the commonest crime alert in the side of New Orleans. From Spotcrime, in the past six months for each crime, the total highest reported incident is 37. Violent crimes take 466 against 2,554 total crime registered. No surprise the crime rate is 1% lower than the national average. 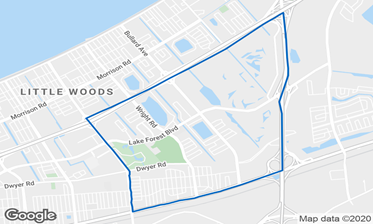 This neighborhood has a low crime rate and the police presence is felt. Although, noted are drug dealings, though minimal, still an area of concern. This place has a total crime of 3,940 per 100,000 people, and one’s chance of being a victim of crime 1 in 26.

Low number of incidences proves that this neighborhood is not completely dangerous. Of the crimes reported, Assault, theft, and shooting still top the chart. Over the years, crime has only increased, and by 15 percent.

Crime rates, though slight, still account for the results leading to 67% greater than the national average. 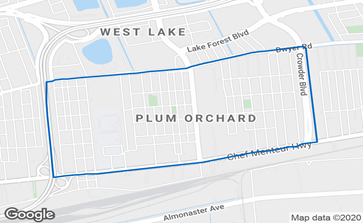 To learn also, what parts of New Orleans are dangerous? Other places worth listing are:

Although the crime rate, especially violent crime, is reportedly high, with reasonable precautions, New Orleans is a relatively safe city and can be enjoyed to the fullest.